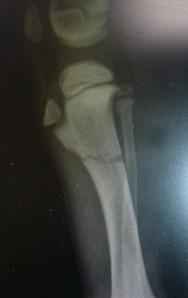 You know that feeling, when you have been through a lot and you are just starting to think that the worst is over; you can relax; smooth sailing ahead- and then something bad happens to ruin it? Yep, that’s the one. That “oh shit” moment, when you wish more than anything else that you could turn back time- just for a few seconds- and have a re-do. Well, sadly we had one of those moments. The Lionscourt F litter had been through a few challenging times, and we’d lost poor Green Girl early on. Then our little corner of Gloucestershire was turned upside down by the arrival of the little orphans, and it was all hands on deck for three weeks.  But we’d made it. The long awaited Anglo-French litter were thriving; They were big, beautiful, happy and exceedingly friendly. They had had their vet checks at 7 ½ weeks, were registered, inoculated, chipped, insured  and ready to go to their new homes. By the Sunday when they turned 8 weeks old, three had already left us to start their lives in their new families. The sun was out, the day was warm, all was good in the world- And then it happened. One of our beautiful puppies was broken in the blink of an eye. And not just any one- only the most gorgeous little girl of them all.

How can things happen so quickly? Let me tell you, it only takes a moment. We were in the courtyard with friends and the pups were happily scampering about enjoying the attention. Momma Nubi was there as well, no doubt feeling unencumbered now that she was no longer nursing, getting her figure back, feeling strong and light on her feet again at long last. I’d just left the courtyard and closed the gate behind me. I had got only a few steps away when suddenly I heard a terrible screaming. Apparently, Nubi had tried to leap over the gate to follow me and had miss-timed her jump, caught herself on the top rail and fallen backwards directly on top of the most darling Miss Orange. Shocked, we all ran to see what had happened and found Miss Orange crying and holding up her right hind leg. Nubi looked aghast at what she had mistakenly done and was doing the doggie equivalent of pacing nervously and wringing her hands with worry, poor thing.

The puppy eventually stopped crying and just sat looking stunned and sorry for herself. She would eat pieces of liver, which prompted my friend to speculate that it couldn’t be too bad, or she would refuse food. But I knew it was bad and she was just a poor confused puppy who would not let her foot touch the ground. I called the clinic and she was seen by the emergence vet within the hour. They decided to give her pain relief and anti-inflammatory drugs in the hope that it was just a tear or very bad sprain. We gingerly settled her in a crate over night and the next morning, seeing that she would still not touch the ground with that foot, whisked her back to the clinic. An x-ray confirmed it- a broken tibia.

The good news?: In an 8 week old puppy, healing will be very swift. Her bone cells are proliferating at a phenomenal rate as it is. Also, it is a clean break, no fragments or violent misalignment, so should knit together cleanly. And the fibula is still intact, so that will perform a certain degree of self-splinting and help hold the leg firm while it heals.

The bad news?; if the growth plate is affected and fuses early, her tibia will not attain full length causing her to have a deformed leg. In such a case, corrective surgery will be needed. Also, as she is growing so fast, the leg cannot be set in plaster, but has to rely on wrapping only. Because of her rate of growth, not even a splint will fit her correctly, so she must have it wrapped in vet-wrap and immobilised from hip to toe for four weeks and be kept quiet….Ever try to keep an 8 week old puppy still and quiet for 4 minutes, let alone four weeks?

She hated the crate, but accepted it by the second night. By the third day the wrapping had slipped to her knee and it was straight back for another x-ray and re-wrap. It became clear that she would need at least two dressing changes a week. Learning to urinate with a stiff leg was a challenge that she quickly mastered. To help with her poo, I put her on a completely raw diet, so she would have hard dry faeces instead of a lot of something a good deal messier. I also made sure there was a lot of crushed bone for calcium and other good quality food to support growth and regeneration. She gained 1.6 kilos between 8 and 9 weeks just lazing about the kitchen and that rate of growth alone meant the wrappings were shrinking as her leg expanded.

As I write this we are one week down, three to go for the leg to be bound up. When the wrappings at last come off, the leg will be like wet spaghetti and there is a real danger of her twisting and ripping the ligaments as she tries to use it, so care must be taken. And it will be. We’ll get there, and hopefully, she will be as good as new and you’ll never know that she had such a dramatic start. Fingers crossed for her. It certainly leaves me realising how very fragile things can be, and how- in the blink of an eye- accidents can happen. Puppies need to play, they need to meet and greet people, and they need to interact with other dogs. Yes, take all the care you can, but do remember, accidents can happen. 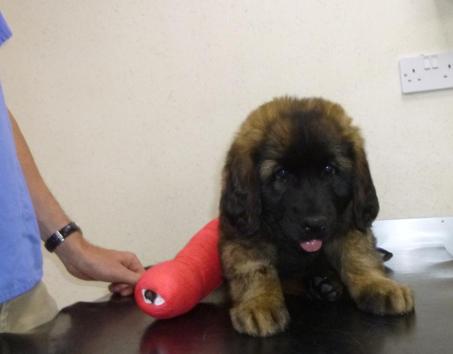