The term “Polygenic” simply means many genes and refers to inherited conditions that are governed by multiple genes rather than by the simple pairings of dominant, recessive or x-linked genes. An example of a polygenic condition that occasionally affects our breed is hip dysplasia. There are believed to be a number of genes at work that influence the structure and development of the ball and socket joints and puppies will have a chance to inherit sets of these genes in different combinations from each parent. This is why it is possible to have a puppy with a high hip score, whose parents both had very low hip scores. It could be that the dam had some of the “bad genes”, but not enough to cause the problem and that the sire had the same, only he carried the other half of the “bad genes”. Put these two together and some puppies in the litter have a chance to get both sets of bad genes, half from mother and half from father, resulting in hip dysplasia.

The following illustration shows how this works. Sire and dam each carry 2 of the 4 gene mutations that lead to a theoretical  polygenic illness. Because each only has two and the rest of their genes are healthy, they never become ill and seem perfectly fit themselves. They have a litter of four puppies. One inherits a single mutation. The second gets two of the four and a third gets a set of genes with no mutations at all. It is possible that none of these three puppies will show any signs of illness themselves, and number three will never be at risk of passing on any of the faulty genes. The fourth puppy however, is unlucky and inherits all four bad genes, two from mom, and two from dad. This puppy therefore has the full set of four defective genes and will become ill with this polygenic disease. 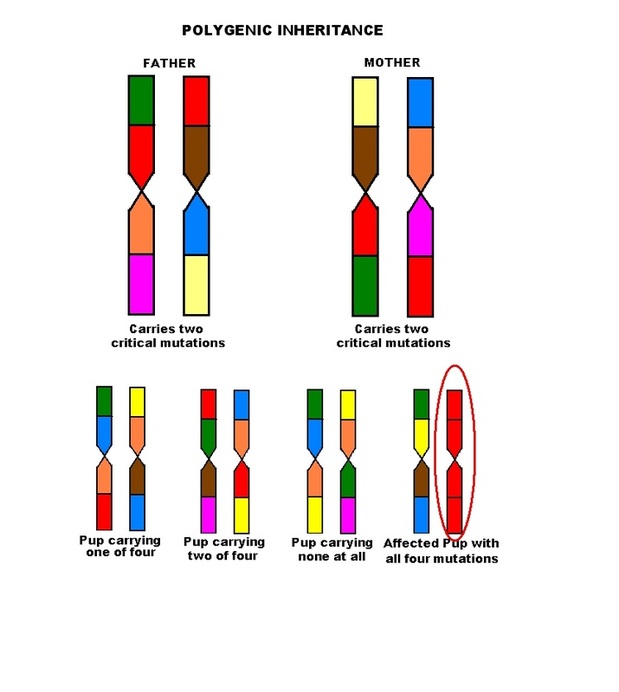